Getting Involved in Open Source Projects

Earlier this month, my first patch to an open source project was accepted. It was a thrill. In all these years of using open source libraries and software, I have never once given back to the community. I have made my own work open source under the MIT licence and have it hosted on the popular GitHub. I can't wait until my next pull request/submitted patch.

So how did it come around? Well I was reading the documentation on HBase at work, trying to work out whether I could get a description of a table. I found as I was scrolling through the docs that the font size was growing ever bigger.

Like a good citizen I fired up the Apache Jira and created my ticket feeling very proud of myself. It is not the first issue I have raised on an open source project. I am too eager to fire off an issue for someone else to solve. This time however, the project lead thanked me for my bug report but then asked if I had a patch. I thought to myself, who me? You trust me to dive into your project and change the code??

Well of course, that is what open source projects are all about - letting other people contribute, not just free stuff! So I thought, ye I can take a look at this closer and see what the problem is causing the font to get bigger.

I found that some javadocs in the class had some unclosed <code> tags. I looked around at other issues on the project to see how one even would submit a patch. I could see that some resolved ones had the code attached to the ticket itself. I thought this was a bit strange at first, why would you attach the code to the ticket? Surely the source control system would be suited to do this in some form of way.

Anyway, after some googling, I found how I could create the .patch file from the git command line:

I submitted the patch and the project lead thanked me and after some e-mails from a robot that does the automated tests, code qulity checks and build, the ticket was marked as resolved and now the online documentation is fixed!

It gave me a small sense of pride and am looking forward on creating my next patch. I may even try and find one that is more technically challenging.

Similar to my Bus: York to Leeds post back in 2010, I thought I would do a similar analysis for my commute for the last couple of years.

I took this journey twice each working day for 2 years before moving to Cardiff. I wondered how many miles and hours I have spent on the trains.

Final percentage for you: the time I have spent on the train is equivalent to 7.27% of the 2 whole years!

For the 2013 Central Hall Musical Society's production of West Side Story, I was invited to design and make the website to allow registration, cast audition bookings and ticket sales. I used the Foundation CSS and JavaScript framework along with a jazzy font from Google called Alfa Slab One.

There were 2 main things I added in differently to this site compared to the 2 I had previously developed for the Central Hall Society. The first one was from a design perspective, and the the second was microdata.

For the teams pictures, I added in a CSS3 transform that titled their heads at an angle, where on hover the angle changed giving a slight spin appearance. This was done with a few CSS declarations.

After writing up the markup and adding the CSS to match the design, I looked at exposing the event data to search engines via microdata.

By adding directly to the existing HTML markup, I was able to identify the event type, the performer, the location and the date.

When the search engine robots index the page, they should be able to pull out the data and use this to provide more relevant results. Google provide a tool to test the end result.

It was very interesting to see all the types of different things you can markup and expose data for, a list is on the schema.org site.

The Spoonheads are in my Wi-Fi 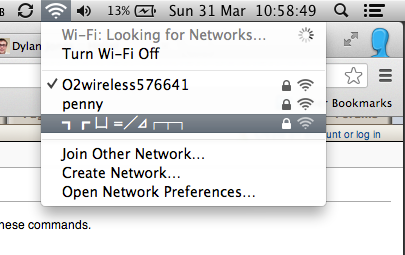 As seen in last nights Dr Who Episode, a mysterious Wi-Fi hotspot has appeared with an SSID of "┓┏ 凵 =╱⊿┌┬┐"